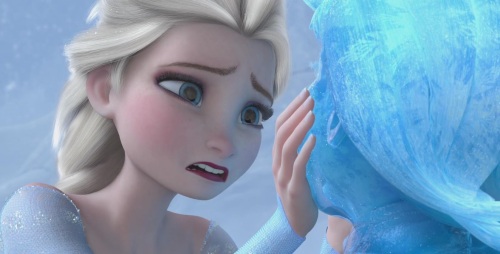 Are we still talking about Frozen? Yes? Excellent. Because I have something important to address about our much-loved, anxiety-riddled role model of an ice queen Elsa.

In early development Elsa, being the snow queen in The Snow Queen, was planned as the villain of the piece, but with some inspiration from her voice actor and a general sit-and-think of things she was reworked to flesh out her potential as a sympathetic, misunderstood almost-heroine. Her ice powers, while not conforming to a lot of logic, serve as a wonderful metaphor for issues of isolation and uncontrollable anxiety as well as being the cause of them in her case. Quite literally, she’s afraid to go out in public, even to her parents’ funeral, in case ice shoots from her fingertips (which to clarify is a very valid fear). Scarred after injuring her sister Anna when they were young, powers that would have otherwise made her super special now just terrify her, and her parents too, who understand them even less than Elsa and decide the best thing to do is to lock her in the castle and impose a ‘conceal it, don’t feel it’ mantra that evolves into Elsa chaining herself to the psychology that she can never reveal the tiniest fragment of her true self to anyone without freezing them.

It’s not fun, and this is made abundantly clear. Sitting alone in a room full of ghostly snowflakes is a pretty nice visual metaphor for having internal issues and not feeling able to talk to anyone about them. Her creators wrote and animated her with a desire to portray anxiety and depression, making her, whether you get clinical about it or not, a Disney princess with major neuroses. Which is not always the stuff of warm hugs, yet Elsa is everyone’s favourite at the moment, across the age groups. I imagine she will stay for some time (it’s been screening in cinemas for four months!). She is the star of a Disney movie after all—those have a lot of cultural influence, and they stick with you. Which is why it’s so great that she is the way she is. 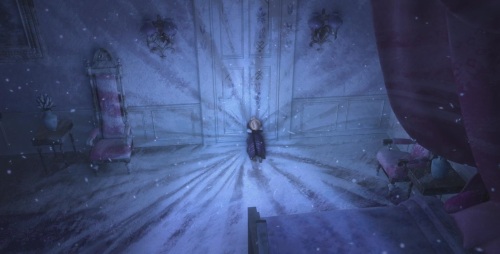 I’ll be the first to say Frozen is a very flawed movie, but to its credit it was in developmental Purgatory for near ten years and despite everything about that felt a little lacking, what it did give us is a very important heroine. Two, in fact—as with Tangled and Brave (the other Adjective Princesses) there’s a shift away from hammy, power-hungry song-belting villains and more towards emotional, localised conflicts. Aside from the smarmy prince coming out from under the cloak later to try and make a mess of things, the conflict is all about Elsa and Anna, as sisters with a messy-as-hell relationship rather than ‘heroine’ and ‘villain’. What comes out of it is a story about loving people despite their flaws and problems, and using that love to help them. As morals go, you know, that’s definitely a good one.

Elsa’s sort of in limbo—she isn’t a villain per se, but does little to earn her right as a heroine, or to earn the redemption and acceptance she gets from the kingdom at the end of the movie. But the more I thought about it the more I realised that was the point—she acted realistically by being reckless and selfish and succumbed to the pressure and stress of her own powers and the attached anxiety she’s developed, and Anna saved her anyway because that’s what unconditional love is. The message isn’t necessarily to give people you care about a free pass to make a dangerous mess of things, but to make an effort to understand and forgive them when they’re going through a tough time, and that running away and turning down help and support isn’t the answer.

Sure, the ‘love will thaw!’ message at the end was not entirely original and a tiny bit on the cheesy side, but it was sweet, whether it was groundbreaking or not, to show the healing power of sisterly affection rather than romantic. Elsa’s development is to learn to accept the love being offered to her, and not to be so quick to associate getting close to people with hurting them. Granted, this is a warped worldview to start with, based on one incident when she was a tiny kid, and the childish fear that came with it has stuck with her and mutated into complete agoraphobia, or at least a chronic terror of human interaction, by the time she’s crowned. It’s a wonder she made it through her coronation as long as she did, gloves or no. I can’t imagine being the central focus in a giant room full of strangers when you’re only used to family and servants is easy on people without anxiety issues. 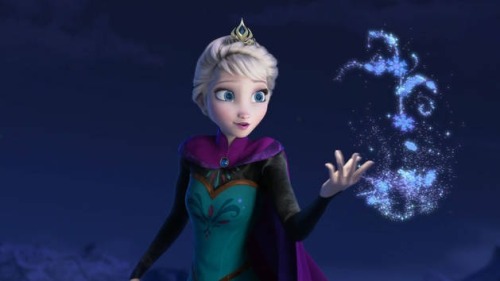 As fantasy does, it uses magic as a metaphor and a heightening element for whatever issue it’s talking about. I think in some way, though of course none of us can make ice castles at the drop of a hat, everyone can relate to Elsa (if not Anna on the other side of the relationship). Everyone at some point in their life has felt secluded and helpless, feared being ostracised, feared hurting people or felt trapped by something that makes them fundamentally different, whether it’s a mental illness or sexuality or a life dream your parents don’t approve of. Or maybe like me you see yourself in Elsa the big sister, fully aware that you too are a chronic shutter-outer when it comes to siblings (I watched the movie with my little sister in January, and I’m pretty sure I sniffled and hugged her until she got embarrassed and I did not apologise).

Either way, Let It Go is such a beautiful power song so adopt—that, people have pointed out, is vague enough to double as a coming out anthem, a general declaration of personal independence, or just something therapeutic to belt out into a hairbrush after a hard week.

Everyone’s in love with Elsa. With young children especially it’s great to see them presented with a character with clear psychological issues and their reaction being to adore and adopt her. By having Elsa and her fractured psyche in the light of a sympathetic heroine that the story makes adamant is deserving of healing love, it says to kids, and people in general, “Look, some people have these problems, some people are at war with what their body does to them. They didn’t ask for it, it’s just the way they are, and you should help them instead of being afraid.” 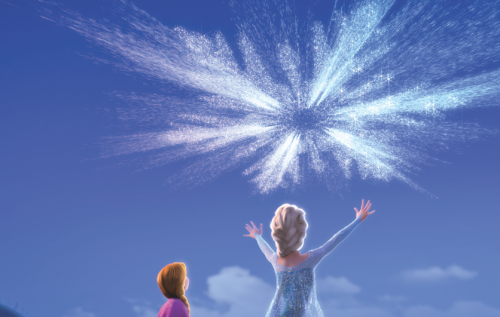 Psychological issues are not banished to the realm of cackling or disturbed ‘crazy’ villains but presented in a character that’s loveable and simply misunderstood. It tells kids that it’s okay to feel like Elsa, and you don’t have to shut yourself away for fear of hurting people. It encourages kids to be like Anna, to love and protect selflessly because your Elsas aren’t defined by their issues. But in that also acknowledges that the supporters, the Annas of the world, don’t have to be infallible saints that never make any mistakes or selfish decisions. Both sides of the relationship are equally important to portray well when you’re making a story about this kind of thing, especially when it’s something like a Disney movie that’s going to draw a lot of attention and stick in the minds of a generation of kids.

We mess up, we hurt the people we care about, we make silly snap-decisions and sometimes we plunge our kingdoms into winter. But we can work it out, and come to terms with our problems rather than running away from them, and have a little faith in the people we love even if things get frosty. That’s the message the beloved Queen Elsa is sending to kids, and that’s what I got out of Frozen. That, and it’s a bad idea to bring snowmen to life if you don’t want cheesy comic relief and exposition waddling around.

Tagged as Disney, Frozen, you did a good thing