Free! is an animated TV show about boys who swim. Actually, it’s about the power of friendship and the importance of letting go of the past (and how the two strongly intertwine), and the sport that forms the backdrop could be anything, really. Though the constant connection with water does lead to lots of lovely symbolism and scenery (and the question of what else Kyoto Animation could have bought with their season budget, e.g. Belgium).

I mused upon this show at its beginning, and now it’s time to talk about it looking back. Here we go, guys. I’m a little late to the party, but it’s review time.

The story surrounds a swim team of four (later five) boys who were best friends in middle school but have since split apart (insert Mean Girls quote here) when their most enthusiastic member, Rin, moved to Australia to attend a specialist swimming school. His dream, since he could paddle, has been to get to the Olympics, and nothing was going to stop him, especially the fact that schools just for swimming may or may not exist (though don’t let me claim to be the expert on that. Australia has some pretty crazy things).

Before he ships off to the land of Cadbury and crocodiles, however, Rin participates in a relay with his three dear friends, and they win the trophy. This event proves to be a pivotal one and is looked back on and discussed much in the series, but we’ll get to that in a minute… years later, the three remaining friends broody Haruka, Labrador-in-human-form Makoto and bouncy slightly eccentric Nagisa visit their old club pool before it gets torn down, and who should they bump into but their old friend Rin, who has grown a cloud of mysterious angst, killer biceps and shark teeth. 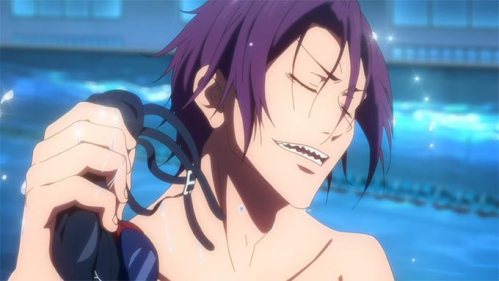 This brings all sorts of things to the surface and into question (like, how the hell did he get shark teeth), but most importantly inspires the boys (mostly Nagisa and Makoto, since Haru is busy brooding in the bath) to start their own swim club again, aided by Rin’s younger sister Gou who attends their school, is actually quite worried about the emotional state of her brother and isn’t hated by anyone for being a fluttery female character in the midst of a cloud of pretty boys (which was a pleasant surprise and a half).

In fact, something quite boggling is how difficult it is to dislike a lot of the characters. At first they may seem constructed of minimal dimensions, but as the series goes on the audience quickly sees the many facets to them and their emotional depth and range. Haru proves interesting as the moody brooder whose one true love is water (to the point of wearing swimmers underneath his clothing all the time), but claims he has no desire to swim competitively again. His relationship and rivalry with Rin, especially, is all knots and tangles and regret, which leads to some of the most gloriously melodramatic moments in the series. Like, heartfelt shouting collar-grabbing soap opera stuff. Swimming is serious bloody business, guys.

And Haru only swims freestyle, as becomes his mantra, “I only swim free”. Because that is what water is, it is freedom, it is solace, it is peace. Or is it?

Haru’s character development largely comes from realising that it isn’t swimming itself that provided him with a sense of fulfilment but the people he was sharing it with, and this is basically the crux of the emotional development of the series. That’s a bit of a cliché, you say? Well, yeah, perhaps. Though it doesn’t come off as a cheesy fist-pump about teamwork from a sports movie, but is eased into over the course of the episodes and comes off feeling genuinely poignant. Haru begins to be visibly happier and more openly supportive of his friends as he grows close to them again and acknowledges everything they have done for him, while Rin watches with his triceps tightening in angry vexation as he gets no buzz just from winning.

Dat animation, though (Gif made by alibakakun)

The series is not only about friendship but does it extremely well, which is something I always applaud. Naturally, people interpret the strong bonds therein into romantic ships, and that’s fine too, because whether it’s noted as platonic or otherwise the series presents a group of people who have a shockingly real-feeling and honest love for each other. Especially in the case of the ever-supportive Makoto, who is essentially the heart that holds the swimming family together and is just one of the most plainly likeable fictional people I’ve come across in a while. Sure, the mean, layered, cynical, messed-up ones are good to pick the brains of and revel in their self-destruction, but occasionally the audience member is just blown away with affection for a genuinely nice character and their genuinely nice relationships.

And if the adorable strong centre of the group doesn’t suit your tastes, perhaps you’d pick the slightly manic but ultimately well-meaning Nagisa as your favourite, or the new addition to the team Rei, who is obsessed with the theory of sporting and aesthetics and manages to be the largest source of comedy and crippling second-hand embarrassment in the series (without being reduced to the butt of all the jokes, which are shared mostly evenly throughout the cast, which was also well-played by the writers) and also, as of the finale, shows that he’s a deeply selfless and sweet person as well. See? There’s something to like about everyone.

Or perhaps the kind and bubbly Gou, who provides a somewhat relatable arm to lean on the fourth wall with as she displays her giddy bewilderment with the ridiculous amount of muscles on show. But also respects and likes the swim club as people and friends! Oh, they could have handled that so badly and one-dimensionally, but they didn’t. Bless. Gou had the potential to be a spectacularly annoying attempt at a fan-insert character, but ends up instead being the light of everyone’s lives and often one of the few characters who knows fully what’s going on, and does so with heart and humour. (It’s also worth noting, on the subject of a male-character-centric show not kicking girls in the ass, that this, a series about swimming boys, passes the Bechdel Test!)

Us too, sweetie, us too

Though the blatant fan service does get less heavy as the series goes on (leaving it, much as I suspected, as a hook for new viewers and a bit of a running gag), the show is still fairly tongue-in-cheek about the entire business even as it gets into more emotional and story-heavy territory. Really, once you get to a certain point, you don’t even notice that they’re shirtless half the time anymore. It does a rather good job, all in all, of balancing the silly with the sensitive, both in story content and character, making it a successful dramedy if nothing else. You’ll laugh, you’ll cry, you’ll want to go swimming, it will change your life.

Well, perhaps not, but I think I speak for a lot of people when I say Free! was a charming bundle of pleasant surprise. It may not be the most mind-shattering, revolutionary or hard-hitting coming-of-age narrative, but it doesn’t try to be and it doesn’t have to be. It sets out to tell the story of a group of friends that swim together, and does exactly that with complete success on the front of creating comedy, drama, emotional hooks, good characters and a fun way to spend half an hour at a time.