Of Arthurs and Lancelots: Mythic Origins of the Irritating Polygon

In banquet halls of old, as bards and poets pranced around regaling everyone with the latest daring legends, I wonder if there was ever any guest leaning on the table sighing “Not another bleeding love triangle.” Because, as previously discussed, they are everywhere… and have been for thousands of years.

Why is this? Well, the bottom line is, people love a bit of drama, and romance tends to generate an awful lot of that, especially when it can be tweaked and stakes-raised by the magic of storytelling—this has been true as long as fiction has existed. In past eras arranged marriages were also much more common, leading to more potential for conflict of affections and love that Society Just Doesn’t Understand.

Another reason there are so darn many of the love polygons peppering our legendary literature is because they were part of a strong oral tradition, and thus a million different versions are floating around in the fictional ether. People were always on the lookout for new stories and a lot of them were mashed together, borrowed from and mutated over time and over mass handling, seeing as half the fun was in the telling—pre-established myths were often adjusted by the individual storyteller, often to make the setting more relatable to the locale of their audience, to change the appearance of the goddess-like beauty of the heroine to match and thus flatter the hostess, or just for funsies.

In any case, the key elements of these grand legends of love remain the same and are, interestingly enough, still the mould that modern love triangle dilemmas are based on.

For instance, the love triangles we see plastered all over everything these days most commonly have a female character at their centre, caught between two men, both important characters in their story. The same pattern repeats itself all the way back to your Tristan and Isoldes and your Paris and Helens and your Lancelot and Guineveres. However, most modern triangles give the heroine genuine feelings for both male leads, leaving her torn trying to choose which one she’d rather end up with. Age of myth love triangles more commonly, as noted above, involved arranged marriages, leaving the heroine’s dilemma less about “which babe do I choose?” and more “how do I get out of this unwanted engagement?”

The source of the drama is less of a romantic emotional choice (in most cases) and more of a struggle of the individual against society, the young woman in question fighting against her culture and the higher powers who are trying to remove her life choices from her. The rules of society are concrete, but love is an emotion as irrational and troublesome as fear, making it the perfect plot device.

Interestingly enough, though, with the whole arranged betrothal thing accounted for, the two points of the love triangle retain the same conventions. Or, at least, we can see where the conventions talked about in my previous gripe, er, post, evolved from. In modern YA triangles the two guys our leading lady is caught between tend to fall into two categories: the sweet and caring childhood friend character and the darker, more dangerous and intriguing figure of mystery. Strip these back to their bare elements and you have this formula: the one that is a more well-known and nurturing character, thus better husband/family material, versus the intriguing, foreign figure of attraction and danger. Compassion and passion, the familiar and the promise of adventure.

This is the basis of the mythic love triangle—the heroine is caught between the one society deems the most sensible choice for a relationship with, and the love interest that is far more rebellious as a decision. For example, a king versus a humble knight, as in the King Arthur-Guinevere-Lancelot debacle. By all logic, dear Gwen should have been perfectly comfortable in her set-up with Arthur, I mean, he was pretty cool; majestic, wealthy and powerful, perfect Celtic symbolism for the fated royal connection to the land… but the chaotic factor of desire and romance kicked in when she met Lancelot, who even had the bonus of being foreign, mysterious, notoriously gorgeous, a bit cocky and pretty damned brooding at times. 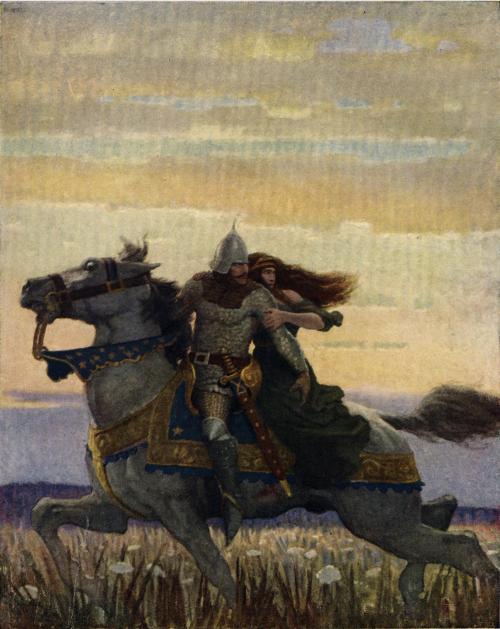 Come back with my queen, you suave French bastard

Of course, the “right” husband choice by society’s standards was often a complete cad in the stories, mostly for dramatic effect. No matter how awesome they’d been in their other heroic tales, they were jealous and fickle when it came to their affections, as in the case of Conor Mac Nes in the story of Deidre of the Sorrows, in which Conor, the king of Ulster, raises a cursedly beautiful girl named Deidre to be his wife, despite the prophecy whacked on her from birth that she would cause unending suffering for his kingdom.

Deidre, rather fed up with this entire business by her adolescence, goes wandering and gets tangled up in a love affair with the first handsome traveller she meets, leading to the lovers’ pursuit across half of the British Isles until Conor tricks them into returning home with the promise of forgiveness. When they arrive he has Deidre’s lover and his two brothers, also protecting her, murdered, leading to Deidre committing suicide rather than being shipped off to marry the king. This pattern repeats itself in many European stories, rarely ending well for the object of jealousy, but more on that in a moment.

It’s important to remember that love triangles have always been a staple of young adult stories, seeing as the characters who got embroiled in these escapades of forbidden love were most commonly only in their teens, seeing as folks simply got on with things young back then. At the heart of it all, they’re simply stories of adolescents fighting for their own emotional independence in a world that’s trying to shape them, pursuing their own dreams and hormones and making for relatable heroes.

And, of course, warning against the dangers of such behaviour by more often than not ending sadly for everyone, which is something the archetype seems to have drifted away from these days. Though the convention remains that the heroine often (not always, but often) ends up with the traditionally less suitable suitor, or the rebellious dark point in the triangle. The divide between the mythic examples and the modern ones is that as a result of this the story of the lovers ends in tragedy, one way or another, for drama on one hand and as a moral message on the other. It’s all fun and games until you end up dead, or start a war, or lead to the downfall of the greatest kingdom ancient Britain has ever known.

Frank Dicksee’s Chivalry, a la the best art blog ever

Another key element of the mythic triangle is still heavily with us, and that is the concept of fighting fate—being tragedies, most of these couples are doomed from the start, whether by their own rash actions or by prophecy or by simply defying the rules set down to them by the societies they live in. Dangerous business, but again, good story potential. Maybe knowing that it was all going to go to Hell opened up the channels for more adventurous and scandalous story material, with sexy exploits, wild elopements, vicious villains and women not taking crap from anybody.

It’s interesting to note that despite being initially pushed around as political tools, the women in these tales are often quite passionate, outgoing and strong. They were rebelling, snarking, having secret rendezvous with spunky knights, grabbing men by the faces and emotionally blackmailing them into elopement (and if that didn’t work, casting spells… bottom line, don’t screw with the Irish), starting wars and running all over the place being central to their own stories. The men varied as being portrayed as sympathetic romantic heroes or tormented and torn between loyalty to their liege (as was a common theme, love triangles often forming between leader-queen-knight, or with the heroine coming between two close friends) and their love for the heroine.

As a civilisation we sort of grew an obsession with romance when it was ‘invented’ and popularised in the Medieval era, and it’s stuck fast enough that we can recognise the tropes used heavily in our modern fiction. I think that’s rather interesting—there’s a deep message in here about universal themes and human nature, and quite possibly, how love triangles were done to death long before I started muttering in my figurative beard about them.

Want more legendary shenanigans? Read Over Nine Waves by Marie Heaney with me, or perhaps Aedeen Cremin’s The Celts, or just Wiki Walk your way through hundreds of years of European myths to discover that this exists. Wonders never cease!

6 responses to “Of Arthurs and Lancelots: Mythic Origins of the Irritating Polygon”