Pacific Rim and a Pile of Good Things

I’ve never been one for giant robots. There has always seemed something impersonal about their metallic exteriors—as a young thing I was drawn to much squishier fare, the children-aimed toy-selling fiction I latched onto starring fantastical animals in place of transforming vehicles. Even now I’m not so much into the whole mecha thing, and unless it comes highly recommended (see: Neon Genesis Evangelion) or is reportedly so delightfully terrible it shouldn’t be missed (read: Transformers 3), I won’t send my focus in its direction.

I also don’t necessarily have a fixation with giant monsters attacking cities either, or a combination of both the aforementioned. So Pacific Rim pretty much passed by my radar. Until, naturally, Writing Buddy leapt forward and redirected my radar to encompass it. Reportedly, it was actually good. Reportedly, I was to go and see it right that instant.

In WB we trust, let me tell you, because it was several different kinds of amazing.

In the near future, the daily life on earth has been somewhat disrupted by giant alien creatures popping up from an interdimensional rift between two tectonic plates, leading to awesome Del Toro-designed monstrosities looming out of our most iconic and picturesque oceans and smashing up everything they see. In response to this, mankind put aside its old rivalries and came together to combat their giant funky foes, creating the Jaeger program: a taskforce of giant human-piloted robots to punch these extra-terrestrial enigmas in the face.

The movie begins with a brief spiel explaining all of this, narrated huskily by the guy who will become our hero. As well as this little newsbite, we get glimpses of the world in its monster-shredded state as the story rolls along. Granted, a lot of time is spent in the ‘Shatterdome’, the base where the last hopes for humanity and the badass metal beasts they pilot hang out, but we also see how it is on the ‘Wall of Life’ programs, where the poverty-stricken must clamber dangerously and without much sympathy from authorities to build giant (and ineffectual) walls around the coastlines to keep the ‘Kaiju’ out.

There’s also a look into the black market that has sprung up with the alien invasion, which I thought was a really interesting and true to life aspect to play with—Kaiju remains are, naturally, rare, and as well as making awesome collectables, Asiatic ‘traditional’ medicine has latched onto their powdered bones and alien innardy bits for exuberant prices. There are also flashes of religions devoted to them, calling them divine judgement, and in the beginning information glances at mecha merchandise, talk shows, and other little details that all weave together to create a pretty convincing and multi-layered version of the world. And it is populated by…

Including, shock and horror, a central female (and she’s not white, either!) who holds her own, isn’t stuck into a love interest role and is developed just as well as the boys hanging around. Mako Mori is petite, not overtly masculine, quietly intelligent and bent on revenge while not being driven to mad-bitch-villainy because of it. She has a good dynamic with Raleigh, our supposed hero, who compliments and contrasts her personality and motives. With the global threat, the action movie also stepped neatly away from the traditional ‘America Saves the Day’ heroism that we often see, and the Russians aren’t evil either. 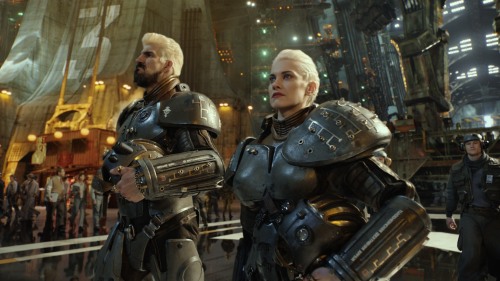 The Russians are, in fact, awesome

Around them are a varied cast of likeable (and not so likeable) individuals, some of which naturally get more time to love than others, but I won’t go on except to say that when these made-up people marched into battle I felt genuine fear for them. I cared for them and wanted them to be alright (even the obnoxious, hilariously fake-accented Australians).

This isn’t what I signed up for! I just wanted my giant robots punching giant aliens in the sea! But instead I got sufficiently attached, in the space of 100 minutes, to the people leading the fight. And got really pumped about the dynamics with…

Raleigh and Mako are interested in each other when they meet, quickly realise they have a lot in common and are mentally and physically compatible enough to dual pilot a Jaeger together. They rescue each other a couple of times, team up to beat up Kaiju, and even have a sexual tension spiced sparring match. Do they end up snogging all over the Kaiju remains? Shockingly, they do not.

I have nothing wrong with romance when it’s done well, but all too often it’s shoehorned as a sideplot into action movies where the characters really have far more important things to do than make Bambi eyes at each other. This trend also has a nasty habit of invalidating any kind of platonic relationships, especially between members of the opposite sex. Because that can’t ever happen, no way. It was a genuinely surprising twist the Raleigh and Mako actually had just that—while you could certainly imagine them getting together and wish for it deep in your heart, you didn’t actually have to watch it happen! I know, right? Bizarro.

You could instead sit back and enjoy the healthiness and happiness of their budding friendship, built both with tender emotional moments and their team effort of kicking alien ass. Don’t we all want a relationship like that, be it interpreted as a great pair of bros or the beginnings of true love? And isn’t it great to have a relationship that can be comfortably left as interpretation and not shoved into the audience’s face?

After all, they’d rather watch the…

Pacific Rim is Guillermo Del Toro’s “beautiful poem to giant monsters and robots”. As I said, I haven’t immersed myself in the world of huge monsters and huge mechs, so a lot of the artistic references are surely lost on me, but even I could appreciate the love that had gone into crafting this thing.

The aliens have Del Toro’s signature all over them in their earthy and slightly ethereal designs, as seen making the world of the faerie mystifyingly terrible in Pan’s Labyrinth and providing clockwork awesomness and visually fascinating elfish cultures in Hellboy II: The Golden Army. Each is unique and horrifying in its own way—and if you aren’t captured by the coolness of the organic creations, you’ll love the Jaegers, each different and meticulously designed.

And, as many films are aiming for these days, it makes a fantastic cinema experience. The sheer scale of this battle for earth’s survival could not quite be appreciated on a small screen. It’s almost overwhelming, everything is enormous and magnificent, from the Golden Gate Bridge-sized Kaiju to the Jaegers to the damage they inflict. In the process of defending Hong Kong, Raleigh and Mako use a cargo ship as a baseball bat in a burst of pragmatism. Try that out for size.

Even if you aren’t nitpicky about the other issues I pointed out and are just in it for a spectacle of giant things fighting, you will still be satisfied and more. And why shouldn’t we be able to have movies that are awesome as well as genuinely good?

Filed under Alex Watches, And I Think That's Neat

8 responses to “Pacific Rim and a Pile of Good Things”