The Magical Girl is a special type of superhero, one that will take all things traditionally feminine and stab evil through the face with it.

The Magical Girl genre is exactly what it sounds like: a TV series about girls with magical abilities. Classic ingredients for a Magical Girl show include a band of young women, aged anywhere between ten and sixteen, gaining magical powers by some twinge of destiny and the goodness of their soul, and becoming figureheads in the battle against some outlying enemy.

To get into battle mode they will have to undergo an often sparkle-filled, musical transformation into their magic outfit, which may not seem very suitable for off-road travel to the untrained eye with its frills, bright colours and cuteness, but don’t be fooled! Magical girls will kick your ass with the power of goodness, compassion and hope, sometimes aided by a cute animal sidekick or mystical mentor.

These adorable little freedom fighters are much more of a staple in Japanese media, especially when conforming to the recipe above, but they extend beyond that as well: Disney tried their hand at it a while back with the W.I.T.C.H. show and comics, and The Powerpuff Girls could be said to fit into this too. Even My Little Pony: Friendship is Magic has elements, especially the early episodes. 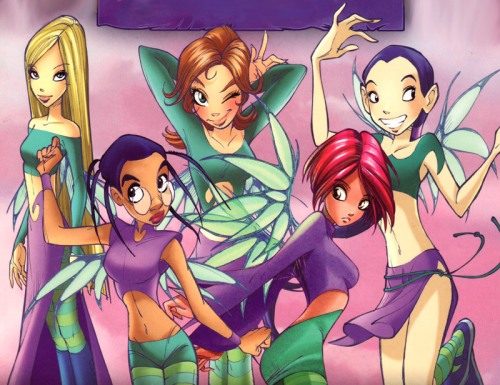 While it’s a huge genre in the anime world, interestingly enough the first studios to play into it claimed they drew inspiration from the American show Bewitched. Which does make sense if you think about it: it’s the story of a female with supernatural abilities, trying to balance her everyday suburban life with her magical one, but tweaked and aimed at a younger audience.  The most obvious example of this is Sally the Witch, a manga and then anime from the 1960s, featuring a cute heroine with magical powers trying to deal with life on earth using her magic, and learning valuable lessons about friendship and the power of good over evil in the process.

From these beginnings the genre has evolved, the most well-known version being the Magical Girl Warrior as described up there—the most famous example would have to be Sailor Moon, which has been enriching the lives of kids everywhere since the mid-1990s, beaming to an entire generation the wonders cosmic girl power.

Because in essence, that is what Magical Girls are all about: girls, kicking ass and taking names, defending their world and the ones they love from whatever evils their story may throw at them. This is fairly standard superhero stuff, but the genre emphasises the power of the young woman and shows the audience that being a girl doesn’t make you weak.

In fact, it’s what makes you powerful—Sailor Moon features its girl team transforming into their flippy skirts and high-heels with “make-up” in their battle cry, and the weapons they use come in the form of winged wands and sparkly tiaras. That’s right, weaponised femineity.  Instead of shying away from the traditionally girly in order to give themselves strength, the Magical Girls throw that very idea in the trash and face their enemies down empowered with the feminine.

All too often, writers feel the need to equate strength with masculinity. If there is a physically powerful female character around, more often than not she’ll act for all intentions and purposes like a man. After all, in the great spectrum of humanity, the young girl is not the first thing you think of when you picture a badass person. Not so with this genre! It not only shows that girls can be tough, but it shows that they don’t have to give up their girlhood to achieve it. 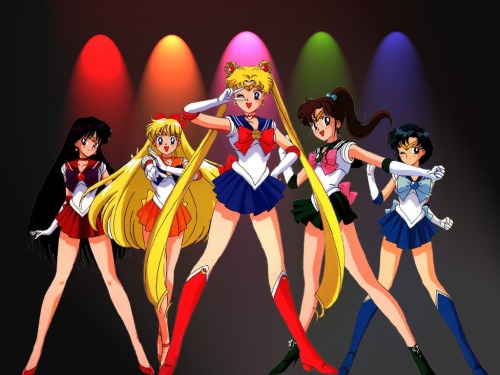 The real magic here is the length of their legs

And with all-female ensembles, it allows for a wider range of character types than often allowed with the token female members of action teams. If you don’t find yourself relating to the main character, doubtless you’ll still be able to find a member of the Magical Girl crew you see yourself in. It enforces that all important message that there’s more than one way to be a girl! You can be a tomboy or a girly girl, or a hard-working student or a lazy scatterbrain, and it’s all okay. And any of these qualities still allows you to pick up your wand and save the world.

It also guarantees that the series will pass the Bedschel Test with flying colours, and provide deeper study and development into the young ladies in the cast. Playing to their target audience, Magical Girl shows often have a focus on friendship, which is something sadly rare in fiction for young women. They may have romantic plotlines as well, and that’s okay—again, they emphasise that there is nothing wrong with the traditionally feminine, and having an interest in boys (or girls! Sailor Moon features a same-sex relationship in the later series— clumsily and rather ineffectually censored by the 4Kids dub, much to everyone’s amusement— as does CLAMP’s Cardcaptor Sakura, and Revolutionary Girl Utena, a series for an older audience, has two of the Magical Girls at the centre of the main love plotline) does not take away any of your power.

Of course, it’s not all sparkles and light in the Magical Girl world—understandably, with so much pure goodness in the genre, there have been writers that have taken it upon themselves to tweak and deconstruct the codes and conventions to produce stories with a darker twist. Revolutionary Girl Utena is an example, as mentioned before, and so is Puella Magi Madoka Magica, which plays very cleverly with the idea of what makes Magical Girls strong. In that universe, Magical Girls gain their powers by contracting with an adorable little cat-rabbit named Kyubey, who grants them one wish in return for their signing up to fight evil monsters. It all seems like your standard fluffy fare, until the bass spectacularly drops and the series tears into just about every Magical Girl trope there is.

It may look cute, but don’t be fooled

To be a young woman is to be powerful, yes, but it is also used against you in the most horrible of ways. In place of the usual evil-fighting team-up situation, the Madoka Magica versions of Magical Girls work alone and even get into fights with one another, competing for territory and supremacy driven by their selfish needs to replenish their magic by defeating as many monsters as they can. And as if that wasn’t enough, it turns out Magical Girls as created by Kyubey are part of a greater scheme, and as cogs in a cycle to harvest their energy, if they take on enough despair they turn into one of the monsters they’re sent to fight.

Here we’re hit with a great metaphor for how society is turning girls against one another, and warping them when they aren’t the perfect little soldiers of happiness and light into shameful, shapeless monsters despised by everyone. The fate of a Magical Girl in this world is not a pretty one no matter how you slice it—they’re doomed to either die in combat with reality-warping abominations, or become one of them themselves after they’re drained of all the hope they have. It rather puts a downer on the Magical Girl message.

At least until the very end, when the Magical Girl mantra is reconstructed: one girl stands up and says no, she will not settle for this, she will not stand to be a part of such a harmful system, and she goes ahead and uses the power of her hope to break the damn thing.

And there is that all-important message again: simply because you are a young woman, it does not mean that you are weak. You have the potential to be powerful and you and your peers do not have to sit back and be the squealing, swooning victims in any system, not in spite of but because you’re a girl. You can go kick your evil oppressors in the chest with your pink ribbon-tied shoes, blast them with your flowery wand and use the power of your unshakeable bonds of friendship to shoot the bastards out of your lives and into oblivion.

19 responses to “Frill-Clad Warriors of Justice and Girl Power”