The girl everyone wants to be… for some silly reason

And what day better than Valentines to talk about the world’s obsession with love, right? Those who take the meaning assigned by floral companies to February 14th will be spending the evening either dining with a loved one or sitting at home resenting the fact that someone out there is doing the former. It would be a good night, in fact, to get a bit tipsy and whip out the faithful DVD of Romeo and Juliet (though you really don’t need a special occasion to sob over Leo DiCaprio’s precious face), crying into the cat and wondering when you will possibly find your own Romeo.

Aaaaaaand at that point I admit I lose a little bit of respect for you, because in delving into that playscript and longing for a story like it for yourself, you have completely missed the point of the entire thing. I also advise you to stop minding about Valentine’s Day so much and to like, go hang out with your friends and family or something, because quite frankly it’s a dumb occasion, but that’s another story.

Romeo and Juliet would have to be one of the most famous love stories in Western, in fact probably all, literature. If you mention those two names, even on their own, doubtless the people around you will know who they are and their association: undying, heart-breaking, world-shattering love.

They defied their family rules for each other, they fought against the misunderstanding world that sought so stubbornly to drive them apart, and died for each other as well, unable to bear living in a world apart.

Let me pause here to say that R&J is one of my favourite of Shakespeare’s plays, and the Baz Luhrman film is one of my favourite movies. It is an excellent story, it has bitter greed and revenge and snarky banter and sword fights and questions about what makes us do the things we do. But it is not a good love story.

Many would disagree, most likely idealistic young teenagers (sorry for the generalisation) who hold it to their chests and sigh, wondering if one day they will find their own Romeo. But here’s the thing, these wistful fangirls are horribly misguided. Romeo was not written to be a great romantic hero, not an idealised love interest, but an ordinary, emotional, irrational and somewhat whiny youth who follows his passions relentlessly and acts foolishly, leading to the deaths of five people. And Romeo and Juliet was not written as a sweet little love story.

If anything, it was a backlash against all the soppy, theatrical romances out there, showing the dangers of acting irrationally on passion. If records are to be believed, Shakespeare wrote Romeo and Juliet around the same time as A Midsummer Night’s Dream, which was a somewhat wackier portrayal of the same message. Both use love at first sight, a device prevalent in many of his plays simply to help with moving the darn plot along (Elizabethan audiences were very tetchy), and both of them play with the concept and deconstruct it a bit, showing the trouble it can cause, Midsummer in comedy and Romeo and Juliet in tragedy.

Romeo and Juliet, many believe, was written as a warning about irrational behaviour when in love, and while it leads to some wonderful monologues and dialogues, the romance between the two bewildered teenagers was not idealised. Even their greatest confessions of affection to one another are mostly based on physical attraction, which is fair enough considering they met about three hours before they decide to get married.

Their rash behaviour, most likely driven, I’m sorry to say, by the addling of hormones to their teenage brains, leads to Verona tearing itself apart and results in the death of Romeo’s best friend and Juliet’s cousin (who were, quite frankly, my two favourite characters in the entire thing), Romeo’s exile, Juliet faking her death, Romeo thinking she’s dead and, because he doesn’t stop to consider that there might have been something so simple as a communication breakdown, he goes and kills himself, leading her to wake up from her fake death and send herself right back into real death, leaving both their parents to grieve horribly.

So basically, nothing is ever okay again. Is this what people really want, when they wish for a love story to rival Romeo and Juliet’s? To destroy their families, kill their friends and end up dead themselves? 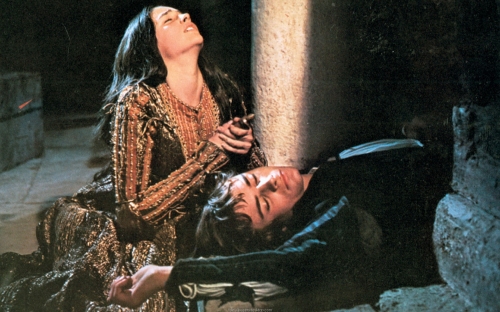 Apparently so, because it’s mirrored and referenced in our fiction (and naturally enough in young adult fiction) all over the freaking place. The concept of passionate, misunderstood forbidden love is a staple of many romance novels, especially within the paranormal genre. The Mortal Instruments. The Twilight saga (welp, I’m mentioning that again). Evernight. Halo. Fallen. Blue Bloods. It goes on and on. Forbidden, world-altering romances each and all in a myriad of different ways that really all fall back to one original pattern. And a few of them even have the sparkly-eyed lack of subtly to quote the play before or within the book, just in case you didn’t get the comparison.

You people are obsessed. Yes, it is a good story, but a four-hundred-year-old cautionary tale about horny teenagers should not be the model on which the ideal romance is constructed. It falls into that whole silly notion that true love must be world-shattering and angst-ridden. I don’t want to sound like a nagging old lady, but it encourages a warped perspective, looking at rebellious relationships as the right kind of thing, and leading to the unhealthy pursuit of a romance as soul-destroying as Juliet’s. It also reinforces the message that it’s totally okay to be made unhappy by a relationship, in fact it’s much more authentic if you are. And by portraying the self-sacrifice of Romeo and Juliet as romantic instead of tragic, we’re idealising suicide and self-harm. Yay!

I am a big fat irritable snark when it comes to this business. Subconsciously or otherwise we are all influenced by the media we consume, especially in the adolescent phase, so the publishing world has really got to stop feeding the impressionable youth dangerous role models and enforcing the message that to be fulfilled they have to live and love in a certain way. And by enforced I mean having it as the model for a good portion of the books aimed at that age group. Granted, forbidden love makes for good drama, but when used purely because it’s the rule it becomes a terrible cliche.

In short, if you’re going to fawn over Romeo and Juliet, admire it as a compelling piece of tragic literature, not the Greatest Love Story Ever, because that is not only misreading and not paying attention to the text but insulting it as well. I sum up the problem with a quote posted on tumblr that sadly asked “What if he’s your Romeo, but you’re not his Juliet?” to which a commenter deftly pointed out “It means you’re his Rosaline, and you survive the friggin’ play.”

Tagged as Love, romance, Romeo and Juliet, silliness, YA, YA fiction

13 responses to “The Juliet Complex”