Ghosts are Cute and Friendship is Magic: Alex Watches Anohana

I’ve never reviewed an anime series on here before, so let’s break the champagne bottle on a worthy boat, a short series with a lot of heart, a meaningful message and ludicrously long title.

Ano Hi Mita Hana no Namae o Bokutachi wa Mada Shiranai, literally translated to We Still Don’t Know the Name of the Flower We Saw That Day and blissfully shortened to Anohana for all intents and purposes across the fan world, introduces us to Jinta Yadomi, a somewhat apathetic and angsty teenaged shut-in who spends his days cutting classes to surf the net and game at home, only going out if entirely necessary and doing so in disguise. His routine is, naturally, interrupted when he begins seeing what he assumes are visions of his dead childhood friend, Meiko “Menma” Honma, hanging around his house and demanding his attention.

Soon enough he realises that Menma isn’t a stress-induced hallucination but a ghost, shown up out of the ether to play with him and the rest of their friends again, only to discover that the tight-knit and carefree group that they had as children have grown apart since her untimely death. Deciding that she must have reappeared on this plane of existence for a reason, Menma declares that “Jin-tan” must grant her a wish and help her to move on to Heaven. She can’t, however, remember what her wish might have been.

So begins the story, powered by the interactions between the five remaining friends, all of whom have grown up and drifted in different directions propelled by grief and puberty. As they reunite and gradually grow close again, old conflicts and guilt and puppy love resurface and they explore the themes of change, growth, love and selfishness. 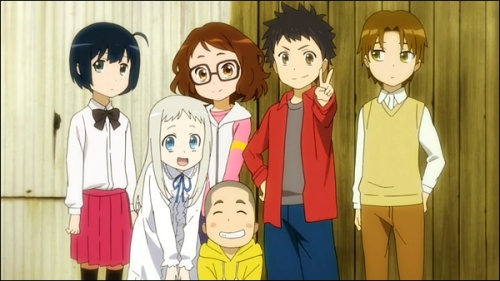 This show is short and sweet at only eleven episodes—short even for anime, where the traditional amount for a ‘short’ series is 12 or 13 episodes. This must be a cultural difference between the East and the West, seeing as a lot of anime, I’ve noticed, are content to wrap up their story in 13-25 episodes and be complete and done, whereas American and British TV shows are pushed to be ongoing with no end in sight, despite the actual story at hand (as happened with Supernatural, if an example springs to mind, which was set up to conclude itself at the end of season five but is still going on in season eight because it was popular and the writers were prodded to continue, I can only assume trapped in a basement somewhere in Los Angeles and sustained only on a diet of cola and mac ‘n’ cheese sent through a slot by the executives).

That aside, the length works for Anohana. It couldn’t have drawn itself out into a long series and certainly couldn’t have gone on for multiple seasons. Eleven episodes was a neat amount of time for the story to unfold and the characters and their relationships to develop.

And that’s what it’s about: relationships. It’s so very rare that you find a series that dwells centrally on friendship, which is weird considering it’s something everyone is involved with and an integral part of human existence. Mostly the focus tends to swing to romance because that’s… more interesting? Maybe? Has more potential to get steamy? Lord only knows. But it was refreshing to watch something that held platonic love as its central theme, showing its power and the way that it helps and changes people.

Not to say that there isn’t a romantic element—a love quadrangle slowly becomes apparent as the series progresses and just when you think you know how it’s all going to end happily something small and sharp will happen that dislodges your certainty. It’s an emotional hook, wondering how on earth this twisted love oblong is going to resolve itself without someone (including the viewer) being left with their heart curb-stomped.

The ultimate message by the finale, however, is that all the tangled romantic bonds between the members of the group are irrelevant as they are all united by their love for Menma and the friendship they share.

Yeah, it’s a heart-tugger. It douses you with nostalgia for your own childhood, whether you had an adventure club setup like the Anohana kids or otherwise—contrasts are often drawn between the past and the present, showing the different mindset with which children view the world, a mindset that Menma, stunted in childish innocence by her death, still retains, bringing a little bit of light back to the cynical gaze of Jinta.

It also brings up questions about grief—one character has dropped out of school and set off on a whirlwind travelling adventure around the world, and is the pluckiest and most outgoing of the group, which is his method of dealing with the trauma of his dear friend’s death. Another character is bitter and angry and takes to mocking the group and their belief in Menma’s ghost, going so far as to disguise himself as her to make them think that they’ve seen her (one of the few instances in the animated medium I’ve seen where crossdressing is heartbreaking and not hilarious in any way), and Menma’s mother has, like Jinta, shut herself in her house and closed off all contact with the world, hating the other kids for having the opportunity to grow up and experience life.

By the end all the kids have come to terms with, in some way or form, the loss of their childhood friend, and are able to move on with their lives at the same time promising never to forget her. A running motif in the show, naturally enough, is flowers, and you realise at some point or another that the plants that make a recurring appearance are forget-me-nots.

It shows many sides of the human condition: the transition from the idealism and innocence of childhood to a darker understanding of the world that is grown as teenagers, love both platonic and romantic and the grey area between, loss and recovery, and the question of what we really do for other people and what we do for ourselves. It’s a sweet, cute, melancholy but ultimately uplifting ride through the lives of six (counting Menma, somewhat ironically) friends and the heartache and joy therein.

8 responses to “Ghosts are Cute and Friendship is Magic: Alex Watches Anohana”