Buffy the Vampire Slayer: Fashion Concious AND able to Hurt You!

There is a trend in characterisation known as THE DEMONISATION OF FEMINENITY which is a bunch of scary big words reeking of social justice and the topic of this week’s post.

We all remember the good old days right, where women were proper ladies who hid beneath their bonnets and occasionally got kidnapped and let the heroes do all the work? I mean what use is a woman in a fight or an adventure? All those graceful lily white hands are good for is needlework and tea sipping, and of course carrying around her sixteen children. The heroics are the man’s job, and his damsel shall stay on the sidelines being distressed.

Somewhere along the line, it was decided that this wasn’t as capital an idea as people thought, since there was this little thing called the Feminist Movement that politely kicked down the door to the great House of Stories and said “Excuse me, good sirs, but where the f*ck are all the badass ladies?”

So they were granted badass ladies and all was well. Now it was not just the menfolk who could save the day with their rippling abs but the women as well, no longer banished to the background and romance roles to swoon and weep and occasionally die of consumption.

But another problem arose in its place. With these new female heroes (“heroines”, like the drug, because they made everyone deliriously happy) came a new stigma which was the reverse of the old one, much as if when the feminists kicked down the door they had hit the stereotype and belted it inside out. In place of the idea that women should never act like men, there came a new trend, and it forbade women from acting like women.

How do you expect anyone to give your fictional heroine any credit if she acts like a chick? God forbid she should ever take pride in her appearance, or want a family, or care about squishy things like cooking or stuffed animals. To fill the hero role, they have to be a man.

Strong! Agile! Tomboyish! The New Hero(ine) doesn’t have time for any of that feminine crap! She’s a tough cookie surviving in a man’s world, and she’d rather be dragged through the mud to Hades (and not the sassy Disney villain’s version, either) than step down to anything vaguely weak or womanly.

So… in trying to reverse the stigma that all women are weak and can’t be heroes, the House of Stories in the sky had just sort of flipped it. Women could be powerful, oh yes, but only if they were completely interchangeable with men. Except with breasts.

So here we come to those Big Scary Words: in order to toss the old damsel in distress archetype out the window, it was replaced by the damnation of any woman who acted like one. In place of women not being taken seriously for trying to act like dudes, now they were scoffed at for not acting like dudes.

Surely we can strike a balance between these two equally sneered-at poles. It’s certainly been done. Firefly’s Kaylee breaks everyone’s minds with her vast mechanical knowledge sitting in the same brain as adoration for frilly dresses and cute things. Buffy slays vampires and kicks ass but also cares about her appearance and her social life. Princess Leia has a love interest but is also handy with a gun. Women can have traditionally feminine traits and be heroes too. Shocker, right?

There’s nothing wrong with tomboyish, traditionally masculine women, of course. The issue arises when it’s not merely in the character’s nature, but an enforcement from the creators branded with GIRLY GIRLS CAN’T SAVE THE WORLD. Sailor Moon did it just fine, I think you’ll find, and saved the universe multiple times using the power of friendship and blasting bitches with her pink heart-shaped wand of sparkles. 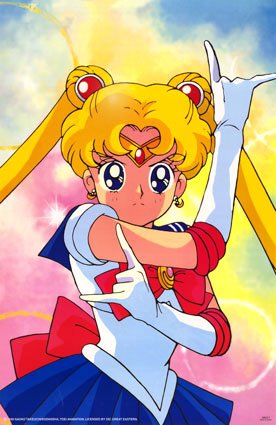 The Hunger Games features a very masculine heroine, in that she is physically strong and tough as nails and doesn’t much care for beauty and emotional stuff. But she isn’t presented as the only type of girl there should be, with her sister Prim sitting on the sidelines being cute and soft and cuddly and multiple other examples that shows a balanced world where different personalities are exhibited within the female cast of a series.

Because in the end, don’t we want to avoid sending more mind-bending messages to the impressionable audience? Welcome to this brave new world, where you can be treated as equal to the male heroes in strength, but only if you completely disown your gender and everything associated with it?

My Little Pony: Friendship is Magic beams this message to the youth, showing a cast of characters that are all widely different and all female, demonstrating that “there is more than one way to be a girl” (and attracting the adoration of an entire internet community, but that is definitely another story). Unlike some things that shall not be named, the character that adores books and is somewhat socially awkward isn’t idolised or expressed to be any better than any of the other types, not the fashion-obsessed proper lady or the hot-tempered athlete. They are all presented as equals, all just different personality types, and all girls, making no attempt to be anything that they’re not.

Maybe we should just focus on making decent characters rather than obsessing over which traditional gender roles they fill? The juxtaposition of the hero role and traditionally girly things makes for an interesting, layered character—naturally, it works the same for men as well. People can like machine guns and baking! It adds an extra layer of interest and personality, rather than sticking to the iron-rigid stereotype, whichever one their writer may choose to fill.

Further reading: The Uhura Effect: A History of Women in Science Fiction Check that out, yo