Remember when superheroes were wholesome and happy-go-lucky? Good, innocent comic readers could sleep at night in the assurance that Superman would never fail to leap those tall buildings and that Captain America was punching Nazis and Communists in the face on their behalf and keeping them safe. They were created as a beacon of hope and a showcase of the power of simple white over black morality.

There have been a few cinema incarnations of Batman, the two most recent being Tim Burton’s, as of 1989 onwards, and Christopher Nolan’s. It’s difficult to find two renditions of the same thing that are so hilariously dissimilar. The Tim Burton series is played out with (naturally, look at the director) quirky flair, almost appearing as a spoof of itself with its over-the-top costumed villains and bizarre antics all around.

The world of superheroes, much like Alice in Wonderland (which, funnily enough, also got a darker and quirkier retool by Tim Burton) is very much ingrained in our pop culture and you’d be hard pressed to find anyone who didn’t know the basics. With the characters so very recognisable and a long-stretching and occasionally tangled canon that reaches over, in some cases, more than half a century, new writers are freer to take artistic license and tweak the characters and stories as they wish.

And what better hero universe to darken and sharpen than Batman? If you’re going to deconstruct and delve into the more twisted side of the superhero world, Gotham City is a prime starting point—while Superman prances around in his America-coloured suit, confidant that he’ll always be able to save the day (unless it involves that pesky kryptonite), Batman has beneath his dark armour the anguished and complicated character of Bruce Wayne, who carries around a thirst for vengeance and justice and the crippling weight of the grief that set him on his path. 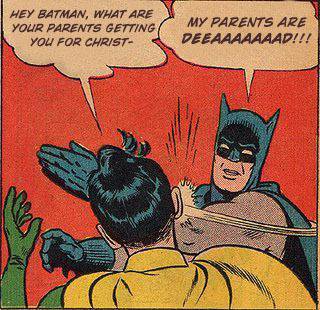 In fact, short of some science fiction-y touches, Batman’s is the most realistic of the comic universes—all heroes, villains and vigilantes are enhanced not by alien heritage or radioactive powers, but by willpower, technology and insanity. This makes the characters immediately more human and, in the case of the latter, much more unnerving than, say, cackling evil scientists that want to take over the world.

Why are the villains of Batman just as well-known and popular as Batman himself? Possibly because they’re some of the coolest characters around, but also because as pure human beings there’s much more room for reader/viewer connection and fascination with how they ended up where they are, donning costumes and terrorising a corrupt and crime-ridden city.

Mostly wacky and comedic in the originals (after all, bad guys are only there to get beaten up by the good guys), they left plenty of room to be re-moulded and framed in a darker light, as seen in The Dark Knight. The lead villain of the piece was the Joker, a bizarre and loopy clown-like figure who was always pulling robberies, playing mind games with his nemesis Batman and getting up to crazy shenanigans with Harley Quinn and other equally outlandish buddies of his. In Christopher Nolan’s film, under the murky shadow of Gotham’s dirty skyscrapers, the Joker emerges as a twisted psychopath with a desire to ‘watch the world burn’, truly unsettling in his sadistic sense of humour, tendency to throw the rules away at any moment and play the bewildered city people off one another. Kudos to the late and dearly missed Heath Ledger—acting talent is making a villain played by Jack Freaking Nicolson look like a wuss.

So when the main villain of The Dark Knight Rises was revealed to be the super-drugged Bane, those in-the-know expelled a universal ‘ohhh crap’. Why was Bane the ideal choice for the movie, the one that promises to be the darkest and grittiest in a dark and gritty series? Because he proves once and for all that our eponymous hero is not invulnerable. He breaks Batman (literally) and gives him and us a very vivid, unshakable reminder that he is human.

This is some heavy stuff, but then again, it’s a heavy world that Nolan has created. When watching the first movie, I wondered where on earth the iconic sidekick Robin was. Within about ten minutes I understood—this is not the world Robin belongs in, with his little cape and shorts and upbeat catchphrases. This is the world that Robin belongs to.

Superhero movies are taking a turn for not necessarily the darker, but definitely the edgier, making their infallible star characters more vulnerable and the morality greyer. The Avengers bicker and have their own inner conflicts. Spiderman deals with loss, grief and teenage angst. And the new Superman movie (didn’t we just have a Superman movie? Oh well) is said to be bringing the Man of Steel down to earth, apparently showing him learning to use his powers and being caught up in real human issues (wasn’t that what Smallville was about? Oh well).

So we’re bored with failsafe heroes and black and white morality. We want the people behind the masks and the question of right and wrong, heroes and vigilantes, justice and evil. Where we once demanded superheroes make us feel safe and reassured, now we want them to chill us and make us think.